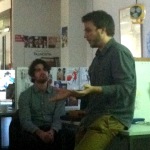 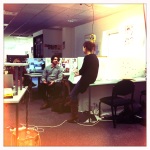 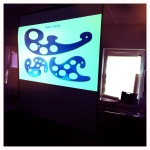 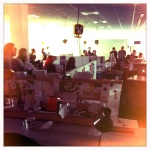 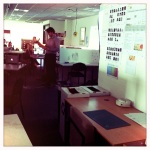 On Tuesday 5th February Levels 2 and 3 were visited by three of our most successful recent graduates, Emma Dibben, Owen Davey and Robert Fresson as part of a Business Forum event organised jointly with our Learning Futures department. The day was a fantastic success, starting with a series of business related lectures in the main lecture theatre and culminating in an afternoon of illuminating talks by by our visiting alumni.

Owen Davey is a freelance Illustrator, well known for his children’s Picture Books but has worked extensively within editorial and advertising areas too. His work has been published in every continent except Antarctica, including picture books in UK, America, Australia, France & China. http://www.owendavey.com

Emma Dibben has become well known for her splatters, fingerprints and splodges, (You may recognize her work from the Waitrose Bag for Life), a visual language that she has carefully developed and is now part of her trademark style.

On graduating in 2004, with a First Class BA (Hons) Degree in Illustration, Emma and moved to Bristol.Commissions soon followed and saw her creating images for prestigious clients including Waitrose, The Guardian and the BBC.

Whilst food illustration is a core element of her practice, Emma thrives in the challenge of editorial illustration with commissions from the Guardian, Conde Nast and the Financial Times amongst others. http://www.emmadibben.com

Flag enthusiast, artist and illustrator Robert G. Fresson has spent the last few years honing the usage of technical drawing tools and materials. He has his own drawing board and some French curves. He also has an inclination towards off-white papers, Ukiyo-e from Japan and CMYK colour separation. Humour is an important aspect to his work, and he has been quoted as saying (probably to himself): “while it is difficult for me to be seriously funny, I find I have an aptitude for being funnily serious”. His lifelong dream is to own a cabin in Novascotia, though conversely he currently lives on a boat on the River Avon in Bath.

Robert has recently completed his MA at the Royal College of Art http://www.rgfresson.co.uk

There is more to come soon on the Level 2 trip Barcelona….