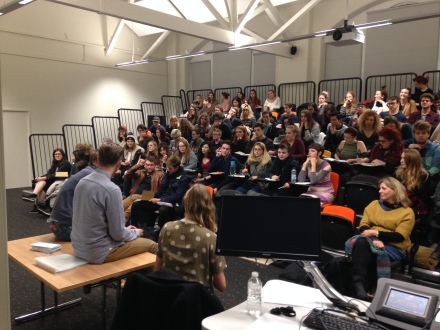 This year’s 1st yr Illustration Forum was held for the 1st  time at Goldsmith’s University in East London. The three speakers this year were Neil McFarland (Ustwo), Pete Fowler and Alice Dunseath.

Neil McFarland framed his talk around the 11 careers that he has had since his early days being inspired by reading comics in the 1980’s. These phases include him working as a cartoonist, album artist, animator & promo director, painter, commercial artist, motion graphics, ‘granulator’,  App creator, digital game artist, creative team director, VR designer. His explanation of the origins and development of the hugely successful Award winning game ‘Monument Valley‘ was fascinating and inspiring.

Pete Fowler is best known for his work with the Welsh band ‘Super Furry Animals‘, having consistently produced artwork since the 2nd album in the mid 90’s. Having been an associate of both Neil McFarland and our very own Tom Barwick in the early days it was no surprise to hear that his early inspirations were comics such as the Beano and 2000 AD. Having begun his career in his home town of Cardiff Pete finally pitched up in London via a Fine Art degree in Falmouth. Influenced by popular culture he began to make all manner of visual statements often using whatever came to hand. His work ranges from large scale paintings and sculptures to delicately hand carved miniature wooden figures. Although he studied Fine Art his work is strongly rooted in an illustrative tradition through his desire to communicate to as wide an audience as possible.

Alice Dunseath was the last of our speakers for the evening. She started her talk with a truly profound animated Vimeo message from Ira Glass that really set the tone for what she was about to show (this is highly recommended). Alice is an animator who has evolved her early commercial into a wonderfully experimental and aesthetically stunning visual language that is both beguiling and hypnotic. Having cut her teeth on stop motion through working on the hugely successful animated version of ‘The Fantastic Mr Fox’, Alice went onto organise the Sierra Leone Film Festival in 2012, before going onto study at the RCA. It was here that she began to develop a fascinating approach to working with ‘growing’ crystals and ice, literally enabling her to animate the creation of amazingly fantastic worlds. Her work gave our students a glimpse of what is possible if you open your eyes and push ideas and materials much further than you might normally do.

The final 15-20 minutes was handed over to a really interesting Q&A session that took in themes such as Virtual Reality and how to break into the world of visual communication. Many thanks to the speakers and to Goldsmith’s University. 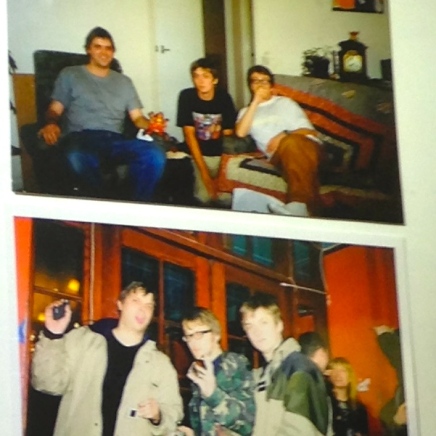 Tom, Neil and Pete in the ‘old days’ 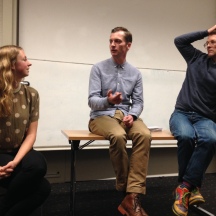 The Q&A with Alice, Neil and Pete 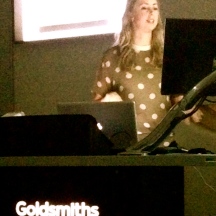 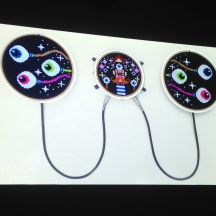