Sue Clarke and several BA and MA illustration students attended the Bologna Children’s Book Fair last week. As the most important annual international platform for children’s publishing it was an amazing opportunity for the students to show their portfolios to a range of publishers from different countries, to meet lots of other illustrators, to gain enormous insight into current trends and thinking in this field through the many talks and workshops, and to be inspired by the various illustration exhibitions.

Two BA illustration alumni won Bologna Ragazzi Awards this year. Will Grill won the Ragazzi Non Fiction Award for his book ‘The Wolves of Currumpaw’, published by Flying Eye Books, and Emma Lewis won the Ragazzi Opera Prima Award for her book ‘The Museum of Me’, by Tate Publishing. It was very exciting to see their work so celebrated at such an important and prestigious event and so prominently displayed on huge screens, banners and cabinets around the fair and in book shops around Bologna. It was also great to be able to attend the presentations of these awards and hear why the judges selected them.

With Will Grill’s book, in terms of the illustrations, the judges were drawn to the contemporary visual but traditional honest technique, the beautiful balance of art and non-fiction, and the rhythm of the book which they described as a ‘visual symphony’. In terms of his writing they applauded its intensity and the rare way that it doesn’t hide difficult emotions for children. Sam Arthur, co-founder of Flying Eye Books, took part in the discussion and was able to describe the lengths that Will went to in researching the book, including living in the wild, literally with wolves!

With Emma’s book the panel discussed how intriguing, personal and imaginative her illustrations are. They felt that the message behind the book is a really important one, in helping children learn how to look at the world around them. They described the book as a door to discovery, not just to art and artefacts, but to themselves. Holly Tonks, commissioning editor from Tate Publishing, discussed how the book really embraces the Tate’s ethos in that it is a vehicle to help break down the boundaries of children going into galleries. She discussed the integrity behind the book and how great it is that Emma made the book she wanted to make and for it to be so recognised and applauded Internationally. It is now due to be published in 11 countries.

Emma Lewis’s work for ‘The Museum of Me’ was also selected for the main exhibition at the fair, showcasing contemporary innovative work in this field. She was able to attend the ceremony at which all selected illustrators were applauded in turn by the huge jury panel and the very lively audience!
The whole awe inspiring (and slightly overwhelming) event was a real eye opening experience for our current students (and for several other falmouth illustration alumni who we unexpectedly bumped into there!). They did fantastically well to get 11 appointments with publishers over the week, from which they got really useful and positive feedback on their work. Having started the week with slight trepidation it was great to see them leaving the fair full of confidence and inspiration for their work (and great to have chance to celebrate such a potentially pivotal time over a few beers in hot sunny Bologna!) 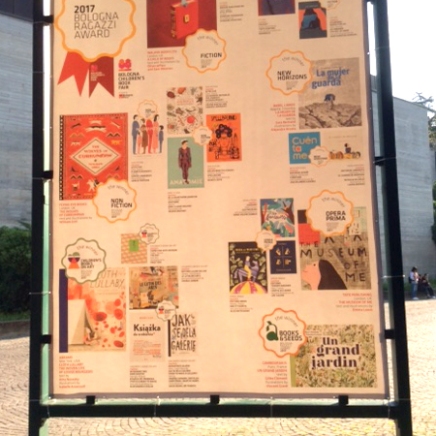