Our 3rd year Illustration students have recently returned from yet another fantastic study trip to New York. They had researched and organised a wide variety of visits to numerous art directors, publishers and agents. The intention of the study trip was to gain critical feedback on their final portfolios from some of the best commissioners of illustration in the world. They were not disappointed!

The New York week included visits amongst others to:

A small group of students were also able to visit the legendary Push Pin Studios where they met Seymour Chwast who cofounded the studio with Milton Glaser in 1954 (incidentally a number of our students met Milton Glaser on the New York trip 2 years ago).

The London week included visits amongst others to:

The student have returned buzzing with inspiration and energy which is great as they now have a week and a half to prepare there work for the end of year submission. Thanks to all the hard work that Mark Keryn and Sue have put into helping organise these trips. Here are some images from both trips…. 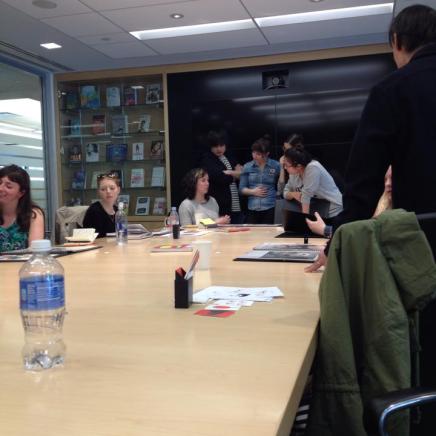 Peter Lott at The Society of Illustrators

Tamlyn and Caroline at Arena